DUI Laws are different in each State. While some states have distinct blood alcohol content or BAC limits, the national limit is 0.08, and adults found driving with a BAC at or past this limit may be subject to minimum mandatory fines and other penalties.

There is no denial of the fact that drivers operating vehicle while impaired (OWI) is their most dangerous behavior. In Bloomfield Michigan, drinking and driving cars are the foremost cause of accidents and crucial area of concern for the traffic officers as thousands of innocent people are killed in such accidents. To stop the same from happening, the Courts have passed a law to prevent drunken drivers to get behind the wheels and Michigan is the latest state where it has been dictated in the recent times.

MICHIGAN LAW AND JUDGES ARE TOUGH ON DRUNK DRIVING AND HAVE STRONG PENALTIES.

The penalties for a  Michigan drunk driving depends crucially on the prior history of driving under the alcohol influence.

FIRST OFFENSE OWI? You have to pay a fine of up to $500, up to 360 hours of community service, up to 93 days in jail, license SUSPENSION for 30 days, with restrictions for the ensuing 150 days, possible ignition interlock requirement, Six Points added to the driver’s record, and a Driver Responsibility Fee of $1,000 for two years ($2,000). HIGH B.A.C. (SUPERDRUNK) cases exceeding Blood Alcohol Level of .17 are punishable by up to 180 days in jail, a $200 – $700 fine, and up to 360 hours of community service; license suspension for 1 year, with restrictions eligible after 45 days. Additional charges may be added if there is injury to person or property.

SECOND OFFENSE OWI? A second offense is punishable by a mandatory-minimum 5 days in jail to 356 days incarceration as well as driver’s license REVOCATION for at least one year, vehicle immobilization and viable forfeiture, and fine of up to $1000. It also causes revocation of travel privileges to Canada.

Even if the alcohol in your system is less than 0.08%, which is the legal limit in Michigan, you can still be arrested for drinking and driving if you exhibit signs of destruction and impairment. Furthermore, if there are any damages or injuries, the case can be filed as a felony. Also, police can charge additional violations for drivers displaying unsafe behavior when behind the wheel, like  swerving, weaving in and out of lanes or may be driving on the wrong side of the road etc.

Without proper representation, the charges for  DUI – driving under the influence and OWI – operating while intoxicated are very costly. Not only would they harm you now, they would have an effect on you in the long run with increased insurance premiums. 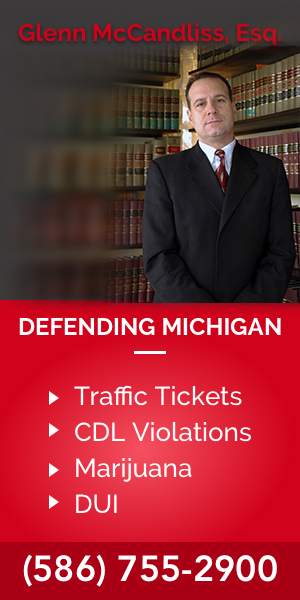